Which deed is right for me? 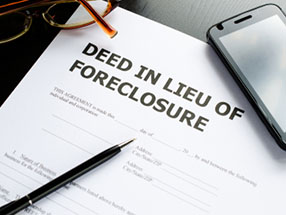 Well, that depends! Over time our legal system has developed many types of deeds, each with its own particular manner of conveying (or affirming) rights, title or interest in property… usually real estate. The term “deed” comes from an ancient ritual called livery of seisin, wherein the grantor would perform an act (deed) of physically handing over a handful of dirt (or perhaps something else that actually came from the property being conveyed), making a recital and thereby transferring ownership of the land. In modern times, this isn’t all too different than handing over the keys at the closing table!

Different states allow for different instruments, but here’s a list of the most common deeds you’ll see:

“As far as I’m concerned, you can have this property. I’m not making any guarantees about it though… in fact, I’m not even saying I own it! All I’m saying is that if I do have an interest in this property I’m giving it to you. Just don’t come back to me later when you find out the title isn’t clean and marketable. Don’t sue me later! I said no promises!“

Now don’t get all bent out of shape if you see received property with a quitclaim deed. You still own whatever interest the grantor had… but when you think about what a quitclaim really says, it doesn’t seem very assuring!

When used ideally, this deed is clears up a “cloud” on title. Let’s say, for example, John Singleton lives in a community property state like and “forgot” to disclose were married when they acquired title to property. Their spouse would then have an interest, and a quitclaim deed would be the perfect instrument to clean things up for the record.

Warranty Deed
A title company will usually ask you to sign a Warranty Deed. There’s a reason for this, and it may not be as altruistic as you think!

With a Warranty Deed, the grantor guarantees the title is free from defects for his period of ownership and every previous owner as well! We don’t know about you, but we’re not usually in the habit of guaranteeing things that we didn’t do. That brings us to the…

Most savvy investors will ask their escrow officer to use a Special Warranty Deed. That usually satisfies everyone. It’s also what we suggest if you don’t know what to use… most states will accept it provided it’s executed properly and according to state law.

Grant Deed
Grant Deeds are popular in California, and are similar to Special Warranty Deeds. They make a couple of guarantees to the grantee, namely:

The property has not been previously conveyed someone else
The property is free from encumbrances, besides the ones already disclosed to the grantee

Beneficiary Deed
Beneficiary Deeds, also referred to as Ladybird Deeds, Transfer on Death Deeds, etc. are used to convey title after the owner dies. They are an estate planning tool, and aren’t available everywhere. Although they are gaining in popularity, the following states allow for some version of Transfer upon death deeds:

This list is constantly growing, so check back every once in a while for updates!

Gift Deed
This deed is used when no money is accepted for the conveyance, and the “gift” must be reported as such on your tax return. Consult your accountant for more info.

Disclaimer Deed
In community property states, your spouse automatically has an interest in any property you acquire! That means they will be on title with you, even if they aren’t named as a grantee, unless they “disclaim” their interest. If they execute a disclaimer deed, you can acquire title as your “sole and separate property”.

Please complete the following form and we will follow up with any additional questions. Complete Questionnaire

Just wanted to say thank you for you and your staff’s service / professionalism! Julie and I appreciate it, and also the extra notary/witness help! Thanks and the best to you and your firm.